11 months ago
by Sophie
No Ratings Yet 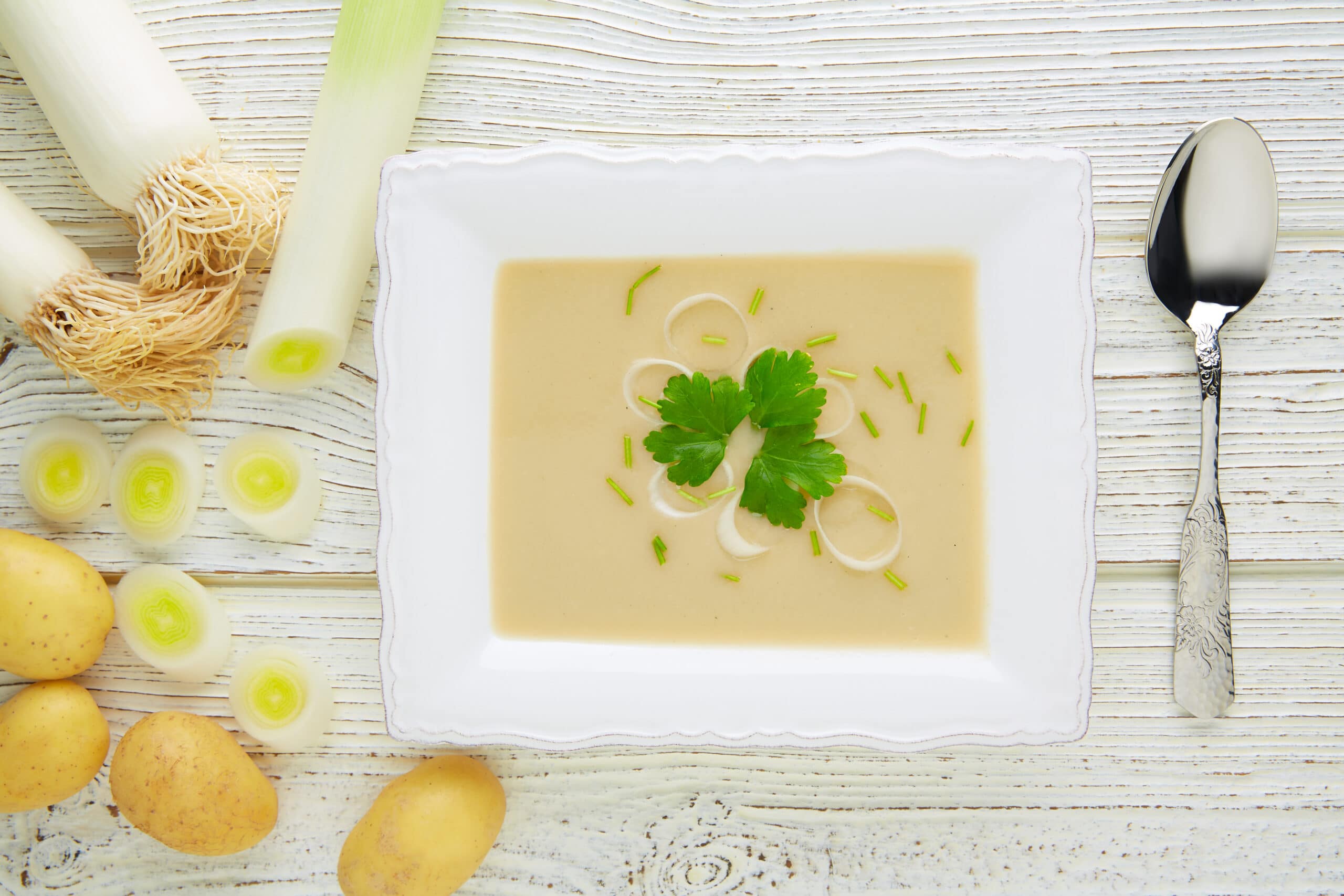 We had a little dusting of snow on Christmas and it was so nice to be warm inside by the fire with our furry kids! What better time for a nice creamy and chunky soup (yes you can have both!) Leeks and potatoes bring wonderful earthy notes to this winter soup. You could also add some wild mushrooms for more umami! Traditional potato leek soup can be a little fattening because it often includes heavy cream and butter. Not this recipe! It is naturally low-fat yet has a rich creamy texture!

My mom used to make a potato leek soup at least once a month in the winter. It was never blended so it was chunky. But I never really thought much about leeks. They seemed a bit boring, until I found out how much of a powerhouse they are for our health and discovered other ways to prepare them.

If you are into gardening, you will love growing leeks. They can be grown from seeds and it takes about 6 months from planting to harvest time.

Which part of the leek should be used?

Most people only use the white part that can be eaten either raw in salads or cooked.
I personally love the dark green part. A Vietnamese friend showed me how she simmered and caramelized the green top for 10-15mn and used it in omelets, scrambles, over rice. That was a total game changer! So don’t ever discard it because it is so good!

How to prepare leeks

Leeks grow in the ground so even though they seem clean on the shelves, they often contain some soil near the roots. So first remove the roots, then cut the leeks where the dark green starts then cut in half. Separate the layers at the bottom and rinse under water.

Leeks are mildly diuretic. They are a good source of vitamin K, vitamin B6, manganese, iron, copper, folate and vitamin C. They are packed with dietary fiber, magnesium, vitamin E, calcium and omega-3 fatty acids.
Leeks are also good for people with type 2 diabetes because they contain allicin, a compound that has been shown to protect against diabetic neuropathy.

If you are a singer or a speaker, you may want to eat leeks on a more regular basis because they help clear and strengthen our voice.
Prevent cataract, lower blood pressure, prevents anemia,

Leeks help with weight loss by promoting feelings of fullness.
I was watching the second season of the show “Emily in Paris” on Netflix and in one of the episode, Emily’s French boss tells her about the French weight loss secret and how it involves leeks.  This is an ancient secret French women have been using for eons whenever they want to easily shed a few kilos. Considering how fattening French food is, they must be on to something right? It isn’t potato soup (although it can’t hurt).

Here is the formula:
Wash 2 pounds of leeks, remove the dark green part (use in stir-fry).
Place in a large pot and cover with water.
Bring to boil and simmer with no lid for 30 minutes.
Pour off the liquid and reserve.
Drink a cup of leek juice (reheated or at room temperature) every 2-3 hours. This will be your only nourishment for 2 days. You will be fasting while consuming leek broth. No worry, you won’t be hungry and you will feel great afterwards. 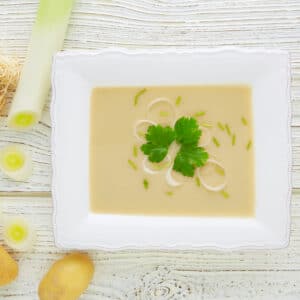 This classic French soup can be made in less than 30 minutes. It is low-fat, yet creamy and filling and has added protein.
Print Recipe Pin Recipe
Prep Time 10 mins
Cook Time 15 mins
Total Time 25 mins
Course Soup
Cuisine French
Servings 4

If you are in a hurry you can skip sauteeing the leeks and add them directly with the potatoes.
Keyword dairy-free soup, potato leek soup
Tried this recipe?Let us know how it was!
Categories: Vegan Soups